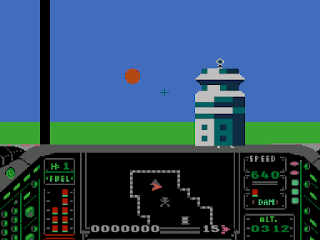 Genre: Action, Simulation
Perspective: 1st-person, Side view
Gameplay: Arcade
Vehicular: Flight / aviation, Helicopter
Published by: Acclaim Entertainment
Developed by: Beam Software Pty.
Released: 1989
Platform: Nintendo (NES)
The game is more like a mix of Top Gun and Sky Destroyer. After you pass a certain section of the path, the game looks like Cobra Command. Of course, graphically, it is not perfect, but the console's capabilities are squeezed out very well. The game is not as hardcore as the famous "After Burner", but this is even more a plus than a minus - less dynamics means more thoughtfulness. The view here, in contrast to the "After Burner" mentioned above, is from the cockpit, which makes the game more realistic.
‹
›
Home
View web version