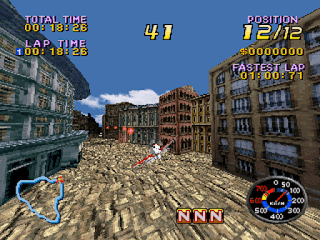 Genre: Action, Racing / driving
Perspective: 1st-person, Behind view
Gameplay: Arcade
Vehicular: Flight / aviation
Published by: Xing Entertainment
Developed by: Metro Corporation
Released: 1999
Platform: PlayStation (PSX, PS1)
Air Race Championship is a wonderful air race on planes from the beginning of the century, usually during the First World War (there are more modern planes in the game, but they are secret). The trails run through cities, gorges, underground tunnels (over underwater rivers). The choice of planes and tracks is quite extensive, although at the beginning of the game four tracks and three planes are available, but when you pass them, you will open even more amazing tracks. You can choose from multiple modes, Single Race, Gnand Prix or Time Attack mode. There is also a split-screen two-player mode. The planes in the game are presented in great detail in the aviation museum, you can zoom in and view each aircraft in detail by turning it at different angles. The game is very dynamic, the plane obeys you, the tracks are picturesque ... This game is incomparably better than the other air race on the PlayStation - Air Race (Bravo Air Race or ReciproHeat 5000) and can keep you at the screen for a long time.
‹
›
Home
View web version