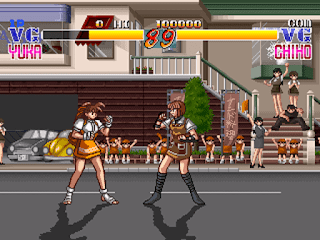 Genre: Action
Perspective: Side view
Art: Anime / manga
Gameplay: Fighting
Published by: Technical Group Laboratory
Developed by: GIGA
Released: 1996
Platform: PlayStation (PSX, PS1)
The Powerpuff Waitress Girls, sponsored by a restaurant chain, are hosting a martial arts tournament. It’s a strange story, of course, they would have to exercise in helpfulness, but apparently the clients are so fed up that it is necessary to throw out the negative somewhere, because the client is always right, but the girl from the next restaurant is not. Advanced V.G is a colorful 2D Fighting game with standard kicks, kicks, paws, special attacks by pressing a key combination. The player can choose from three modes - Normal, VS and Story mode. Normal mode is an arcade mode that does not oblige you to anything, you can practice, choose any character and arena, VS is a 2-player mode or a demonstration of AI combat (computer players). Any of the eight heroines are available as a playable character in these modes. Well, the Story Mode will tell us about the new character Yuka Takeuchi, who is preparing for a competition somewhere in the forest.
‹
›
Home
View web version