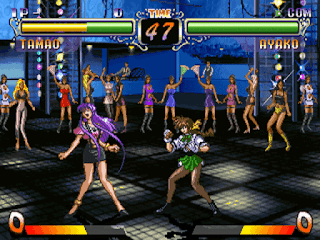 Genre: Action
Perspective: Side view
Art: Anime / manga
Gameplay: Fighting
Narrative: Martial arts
Published by: Technical Group Laboratory
Developed by: Technical Group Laboratory
Released: 1998
Platform: PlayStation (PSX, PS1)
Advanced Variable Geo 2 colorful 2D Fighting where the Tournament of restaurant chains takes place in order to find out which of the waitresses is the coolest, and in addition to receive a prize of a million yen from the sponsor of the Tournament, the Jahana group. The story revolves around a character named Tamao Mitsurugi who intends to take part in the Championship inspired by last year's victory of Yuka Takeuchi (the main character of the first part for the PlayStation). There are 12 characters in the game, including nine from the previous part. In Advanced V.G. 2 more game modes than before, including Arcade Mode, Story Mode, 2-Player Versus Mode, Time Attack Mode and Practice Mode.
‹
›
Home
View web version