19XX: The War Against Destiny Arcade 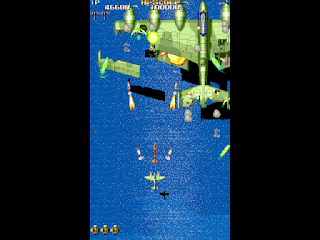 Genre: Action
Perspective: Top-down
Visual: 2D scrolling
Gameplay: Arcade, Shooter
Published by: Capcom U.S.A.
Developed by: Capcom U.S.A.
Released: 1996
Platform: Arcade Machine
"The War Against Destiny" is the name of another sequel to the very popular vertical shoot'em up, even on CPS1, and at the same time is a transitional project on CPS2. Now let's look at what's new. There was a choice of 3 aircraft, each with its own characteristics and special reception. In graphic terms, the game has significantly added: there are reflections on the armor of various equipment, special effects have become brighter and more expressive. The soundtrack has also become one level higher: it has become cleaner and more varied. The screen remained the same size with minor advances slightly beyond the visible borders, Boss battles remained the same: you are 4 times smaller, and besides, it is very good, in a word, squeeze the maximum out of yourself; although not, all the same they had more weapons. The beauty of the original has not disappeared either: the end of the level is also accompanied by a spectacular illustration of defeating the boss. In general, all the innovations did not harm the reputation that had developed on CPS1 at all, you also play with enthusiasm throughout the game.
‹
›
Home
View web version