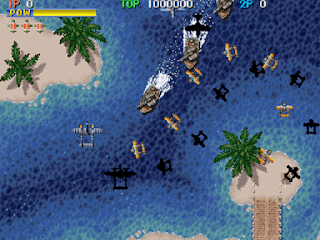 Genre: Action
Perspective: Top-down
Visual: 2D scrolling
Gameplay: Arcade, Shooter
Setting: World War II
Narrative: War
Published by: Capcom Co.
Developed by: Capcom Co.
Released: 2000
Platform: Arcade Machine
The final part of the 1941 aerial action movie will pleasantly surprise you, now there is a wide screen instead of a narrow strip, which gives more room for all kinds of maneuvers, and no one gets in the way when playing for two. The game has got a decent soundtrack, you just fly and enjoy what is happening. The name refers to "The Loop Master", and it is no coincidence that a new ability has appeared - a "loop", you really have to wind up dead loops when using a special blow, and how skillfully you will do it contributes to your stay at the level. As for the enemies, there were enough of them throughout the series, and this is no exception. You will not find a variety of personal aircraft here (only 1 aircraft), but this is quite enough, because as the level progresses, you constantly upgrade your ammunition. Regarding the gameplay, there is no indignation: the plane is easy to control, it moves quickly across the screen, there are as many as 2 special attacks in the arsenal, the end of the level is accompanied by a colorful insert about your feat. The appearance of the boss is accompanied by a siren howl and brief information on his weak points, which looks pretty original. In general, a worthy conclusion to the series.
‹
›
Home
View web version