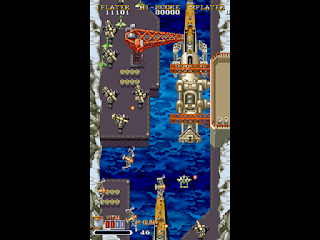 Genre: Action
Perspective: Top-down
Gameplay: Shooter
Setting: Historical events, World War II
Published by: Capcom U.S.A.
Developed by: Capcom Co.
Released: 1990
Platform: Arcade Machine
The first game in the 1941 series on the CPS, and as a result, it should not be taken so harshly. It belongs to the shooting / fly genre, i.e. you fly and shoot at everything that moves. In it you will not find a variety of musical accompaniment, but the action that takes place on this narrow screen will amaze you. A large number of enemy equipment significantly complicates, and at the same time makes it more interesting, the task of survival. The battle with heavily armed bosses is another interesting aspect in favor of the game, the victory over which is accompanied by a colorful poster. The arsenal of your aircraft is constantly growing with each new level, here you will find homing missiles, and machine guns, and additional aircraft that are given to you to help you. Continuous explosions, destruction, in general, if you like this genre, do not miss it.
‹
›
Home
View web version