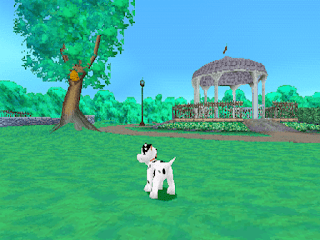 Genre: Action
Perspective: 3rd-person
Gameplay: Platform
Published by: Eidos Interactive
Developed by: Crystal Dynamics
Released: 2000
Platform: PlayStation (PSX, PS1)
In Disney's 102 Dalmatians: Puppies To The Rescue, you must rescue your canine relatives from the clutches of the evil Cruella de Vil and her army of pet stealing toys. In the game, players all the way through 20 levels must sniff out, dig the ground, lift a leg and fight off Cruela's mongrels and toys, as well as her muddleheads-assistants. They will have to explore a huge colorful world, in the center of which are such metropolitan attractions as Big Ben and Piccadilly Circus. The game centers around Cruella's mansion. Players try to avoid the traps set up by the witch's dastardly minions, Horace and Jasper. The game is based on the film of the same name by the Disney film company.
‹
›
Home
View web version