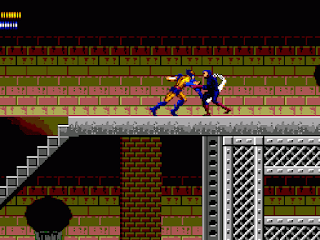 Genre: Action
Perspective: Side view
Visual: 2D scrolling
Gameplay: Platform
Published by: Tec Toy Indústria de Brinquedos S.A.
Developed by: SEGA of America
Released: 1997
Platform: SEGA Master System (MS)
In a dark future, Mojo runs his own TV show, in which participants, like ancient gladiators, fight to the death. To recreate the greatest battles of the X-Men, Mojo travels back in time and catches several members of a team of mutants.
At the beginning of the game, the choice is between Wolverine and Rogue. As you progress through the player will open up new characters: first Gambit, then Cyclops, Havoc and Shard.
‹
›
Home
View web version