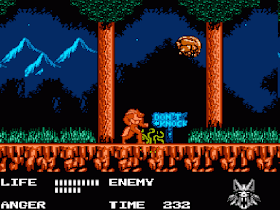 Genre: Action
Perspective: Side view
Gameplay: Arcade, Platform
Narrative: Horror
Published by: Data East USA
Developed by: Data East Corporation, Sakata SAS Co.
Released: 1990
Platform: Nintendo (NES)
The plot is extremely simple and in the game itself is not fully explained, which is generally typical for arcade games of that time. This is explained in more detail in the little comic that comes with Werewolf: The Last Warrior. The bottom line is that the world was conquered by the mad scientist Lawrence Faryan, enslaving people with the help of an army of bio-mutants. And, of course, the mission to save the world falls on the shoulders of one single hero, but not an ordinary person, but a werewolf.
"Werewolf: The Last Warrior" is a typical 2D side scrolling platformer with a twist on arcade action like Altered Beast, which has many similarities. The main character, collecting special characters, can turn into a werewolf or return to human form, however, it is much more preferable to go through the game with a werewolf. In addition to the fact that the human player becomes much weaker and more vulnerable, there are places in the game that can only be passed by being reincarnated. The werewolf moves on its hind legs, and the front limbs end in long sharp blades, with the help of which it not only deals with enemies, but also overcomes obstacles, climbing walls and even the ceiling. In addition, after collecting a certain number of "rage" symbols, the player turns into a super-werewolf, twice as strong as normal and capable of making higher jumps.
The game consists of five levels, each divided into two or three stages, at the end of each of which the player will face a boss. Game locations are designed in a dark futuristic style. A certain amount of time is allotted for the passage of each level, after which the game ends.
‹
›
Home
View web version