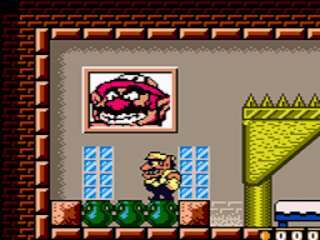 Genre: Action
Perspective: Side view
Visual: 2D scrolling
Gameplay: Arcade, Platform
Published by: Nintendo of America Inc.
Developed by: Nintendo R&D1
Released: 1999
Platform: Game Boy Color (GBC)
One morning, a trio of suspicious pirates, led by Captain Syrup, enter Wario's castle. They search for his treasures and end up finding and stealing them, as well as flooding the castle and waking Wario with an alarm clock. Wario wakes up and realizes that his treasures are missing, so he goes in search of them, embarking on an adventure that is not going to be easy for him.