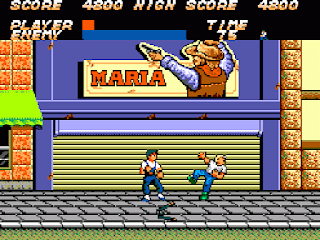 Genre: Action
Perspective: Side view
Visual: 2D scrolling
Gameplay: Arcade, Beat 'em up / brawler
Interface: Direct control
Published by: SEGA Enterprises Ltd.
Developed by: Irem Corp.
Released: 1989
Platform: SEGA Master System
The most inveterate gang of the city, The Rogues, did not like you very much, so they kidnapped your beloved, Maria. However, the guy is not a miss: a Kung Fu master and it costs you nothing to save Maria and the city from the gang. There are five levels in total.
‹
›
Home
View web version