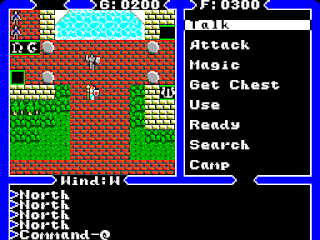 Genre: Role-Playing (RPG)
Perspective: 1st-person, Top-down
Pacing: Turn-based
Gameplay: Puzzle elements
Setting: Fantasy
Published by: SEGA Enterprises Ltd.
Developed by: ORIGIN Systems
Released: 1990
Platform: SEGA Master System (MS)
The death of such a great evil as Exodus did not pass unnoticed. Tension passed through the entire earth, changing its appearance. As a result of the most powerful metamorphoses, a single continent was formed - Britain.
Years of calm followed. Lord British ruled the country wisely. Religion and philosophy began to develop in Britain. Many dogmas were written by scientists, many ideas were born by thinkers. The development of virtue in people was the goal of the King. But an example was needed, a person who would walk the path to perfection - the path of the Avatar.
This was the reason for the return of the wanderer. Who, besides him, can comprehend all eight virtues without turning away from the goal
Ultima has evolved quite smoothly. Therefore, too striking changes can not be found here. But there is something. First, the party has grown from four to eight. Secondly, the storyline has become stronger.
‹
›
Home
View web version