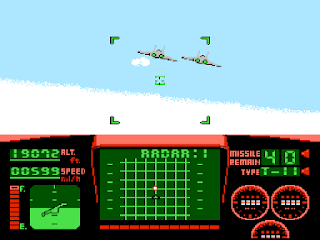 Genre: Action
Perspective: 1st-person
Gameplay: Arcade
Vehicular: Flight / aviation
Published by: Konami
Developed by: Konami Industry Co.
Released: 1987
Platform: Nintendo (NES)
The player controls the film's main character Maverick, who in his F-14 Tomcat must complete four different missions. After choosing the equipment for the plane, the game begins with a first training mission. This is followed by three missions where the player must destroy an aircraft carrier, a base and finally a space shuttle. The game has two different endings. One if the player manages all four missions and lands safely on the aircraft carrier, the other if the player fails, but manages to collect at least 50,000 points. Different scenes from the movie are shown depending on which of these is achieved.

The game is seen from a first-person view from inside the plane's cockpit and the missions consist of two elements, air combat against enemies followed by a final sequence where the player must safely land the plane on an aircraft carrier. For the battle sequences, the player has the opportunity to choose equipment from three different types of missiles. When the plane is to land, instructions for speed and nose angle are displayed on the instrument panel and the player must match given values to land the plane safely.
‹
›
Home
View web version