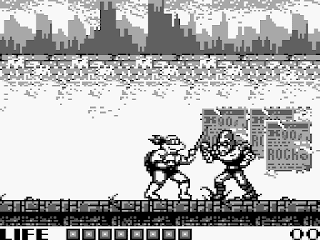 Genre: Action
Perspective: Side view
Visual: 2D scrolling
Gameplay: Platform
Setting: Sci-fi / futuristic
Narrative: Martial arts
Published by: Ultra Software Corporation
Developed by: Konami Corporation
Released: 1990
Platform: Game Boy (GB)
Based on the 1987 animated series, the turtles must rescue their friend April from the clutches of Shredder, for this they must go through 5 levels full of enemies and with a boss at the end of each level.
The enemies that appear are the classic Foot Soldiers, some white and others dark, faster, more ferocious and capable of stopping the stars thrown by the turtles, these soldiers can throw stars and in some scenes objects, they come out from everywhere, they even fall quickly from Any corner of the screen, the Mousers also make their appearance, like the Roadkill Rodney which are defeated with 2 hits or a kick, the turtles must fight with flying mechanical insects, robot torpedoes, bats, fire monsters, laser beams among other enemies.

Scene 2 The Factory (The Sewers of Your Dreams)

In this scene the turtles must dodge tubes and jump over incandescent material, the scene consists of 2 sublevels inside the factory where at the end he is: Bebop who attacks with a shock wave gun.

In this scene the turtles advance quickly on moving trucks attacking enemies until they reach the final boss: Baxter Stockman in his Fly version who attacks from the air with a metal ball gun.

The scene consists of 2 parts in the first the turtles advance over a river either jumping logs or diving, the turtles are attacked by foot soldiers and piranhas, in the second part the turtles enter a cavern full of enemies where at the end They face: Shredder who surprisingly is not the final enemy of the game, does not carry any retromutagene weapon as in other games capable of turning turtles into simple aquarium turtles and only attacks with a sword, is capable of disappearing and appearing surprisingly.

The scene is made up of 2 levels, the first is the classic entrance to the Technodrome where the turtles face all the common enemies of the game and laser beams, in the second part in the center of the Technodrome the turtles advance a long corridor full of dangers and enemies that attack at the same time quickly and surprisingly, at the end is the dimensional portal from which Krang emerges in his android body that attacks with powerful kick jumps, once defeated he escapes through the portal

In the end, The Turtles rescue April and as in the arcade version and in TMNT II The Arcade Game for NES, the Tecnodrome is destroyed in this case it sinks into the ground, then the same epilogue of the arcade and NES versions comes out where it is mentioned the defeat of the Foot Clan and reflects on the final fate of Shredder and Krang, finally the image of the triumphant turtles appears, the credits and at the end Krang is seen laughing as a prelude to the sequel TMNT II: Back to the Sewers.

Basically it is about choosing one of the four turtles (Leonardo, Michaelangelo, Raphael, and Donatello) to advance in each of the platform scenes hitting every enemy that appears on the screen, in this game each non-turtle has no significant differences only The weapon that is seen on the screen differentiates them but does not have differences in terms of range, power or speed.
Each turtle if he crouches and takes a hit can throw a quick star to reach enemies from a distance, he is also capable of giving powerful jumps from all over the screen and combining these with a powerful kick that is the best attack they have as it is fast, powerful and deals heavy damage to final bosses.
Each turtle has 10 energy frames, which is affected by being touched by any enemy, when the 8 frames are exhausted, each turtle is captured and it is not possible to recover it.
Like all Konami games of the time, the turtles recover their energy through pizzas that enemies leave or that appear in various parts of the game, it can be just a quarter of a pizza or a complete one that restores the 10 life blocks of each character.
You can choose turtle at the beginning and after finishing each area, you can also configure the buttons and choose to start in each of the 5 areas that make up the game, although only if you play from the first to the fifth consecutively does the final.
The game is very simple and enjoyable, it contains all the elements that characterized the turtle games at that time, despite the platform its graphics are very good, friendly and with funny scenes, the music made by Tomoko Nishikawa and Michiru Yamane, at the Like other versions of the time, it is very good, it highlights the classic theme of the turtles in scene 1 and at the end in the Tecnodorme.
The game is very short and is characterized by being the only one with secret scenes that consist of 3 types of mini games that enliven the game and that when winning them recovers energy, the first game consists of guessing a secret number in 10 attempts that puts Splinter, the second is about beating Krang by eliminating stars and making over only one and in the third game it is about shooting flying saucers.
‹
›
Home
View web version