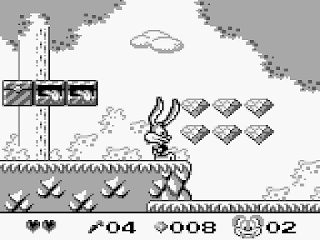 Genre: Action
Perspective: Side view
Visual: 2D scrolling
Gameplay: Platform
Published by: Konami
Developed by: Konami Co.
Released: 1992
Platform: Game Boy (GB)
Babs Bunny, Buster Bunny's girlfriend decided to play in the theater and become a superstar. But the ugly and rich hooligan Montana Max decided to thwart the rabbit's plans by buying the theater and then closing it down. Buster Bunny, Plucky Duck and Hamton Pig decide to stop Max by defeating him and taking the theater away.

In this game, the player has three heroes to choose from. Each of the heroes has their own unique weapons. Buster throws carrots that fly in an arc, Plucky throws pineapples, which at the beginning of their journey have a chance to bounce off an obstacle, Hamton, like in a bowling alley, rolls a watermelon. True, you can collect other people's items. They remain in stock. When the player decides to change the character, he will have as much ammunition as he collected in the previous incarnation. Initially, each has 3 weapons. They can destroy enemies, but they have a limited radius of application and after the destruction of one enemy, their energy will run out. Enemies can be destroyed using a normal jump. For the destruction of one common enemy, 500 points are given. The number of points, divisible by 10 thousand without a remainder (10 thousand points are also considered) and having an odd number of tens of thousands, will give one life. There are five assistants in the game who will help you complete the level, but for helping all of them (except Calamity Coyote) you need to provide a service:
There are bricks in the game that you can use to get prizes:
There are only five bosses in the game. They have an increased amount of health. To destroy you need to jump on your head (except for Elmira and the werewolf).
Sometimes, while playing, the player may discover mini-games offered by baby Chihun. Additional hits, lives and ammo can be earned in these games:
After the loss of life, the number of emeralds is halved (and with an odd number, rounding down). The reserve (not the number) of lives is shown in the lower right corner. After losing all lives, the player loses one credit, all emeralds and points. After losing two credits, the game ends. Alternative ending: if the player has collected 500 or more emeralds, Max will offer to buy a theater from him. However, this will only lead to alternative dialogues and the player will have to fight with him anyway.
‹
›
Home
View web version