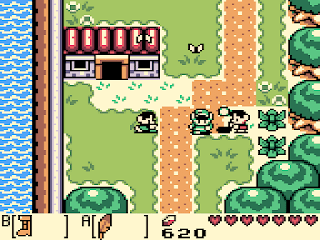 Genre: Action
Perspective: Side view, Top-down
Visual: 2D scrolling
Gameplay: Metroidvania, Puzzle elements
Setting: Fantasy
Published by: Nintendo of America Inc.
Developed by: Nintendo EAD
Released: 1998
Platform: Game Boy Color (GBC)
Originally, the Nintendo developers planned that Link's Awakening would be a ported version of The Legend of Zelda: A Link to the Past for the Super Nintendo. But then the development of the original game began under the direction of Takashi Tezuka, the script for the game was created by Yoshiaki Koizumi. and Kensuke Tanabe. This is one of the few Zelda games that does not take place in the fictional kingdom of Hyrule and lacks Princess Zelda and the Triforce artifact. The main character named Link finds himself on Koholint Island, which is guarded by the Wind Fish. Taking on the role of Link, the player battles monsters, solves puzzles, and searches for eight musical instruments to awaken the Wind Fish and escape the island.

Unlike most of The Legend of Zelda games, this game is not set in the fictional kingdom of Hyrule and does not include the attempts of the main antagonist of the series, Ganon, to seize power over an ancient artifact called Triforce. Princess Zelda and other characters from previous games are also missing in Link's Awakening; the game contains only the main character Link and mentions of Zelda. The game takes place on the island of Koholint, a piece of land isolated from the rest of the world. Despite its small size, the island includes a large number of dungeons and interconnected paths.
In Link's Awakening, the player is helped by advice from non-player characters, for example, the modest old man Ulrira, who contacts Link exclusively by phone. The game features characters from other Nintendo games: Worth, Yoshi, Kirby, Dr. Wright from SimCity and the exiled Prince Richard from Kaeru no Tame ni Kane wa Naru. The Chain Chomp creature from the Mario game series was brought into play after one of the programmers gave Link the ability to lift and carry creatures. Goombas from Super Mario Bros appear in underground sections where the protagonist can enter. Project manager Takashi Tezuka said that Link's Awakening has become like a parody of The Legend of Zelda series. Some characters in the game break the fourth wall: for example, one child tells the player about the save system, but then admits that he does not understand what is at stake.

Following the events of The Legend of Zelda: Oracle of Seasons and Oracle of Ages, Link embarks on a new journey. Caught in a storm, the main character's ship is wrecked, and he wakes up on the island of Koholint. He is brought to the house where Taryn and his daughter Marin live. Fascinated by Link and the outside world, she dreamily tells the protagonist that if she were a seagull, she could leave the island and travel the seas. After Link regains his sword, a mysterious owl tells him that in order to return home, he must wake up a guard of Koholint named Wind Fish. The creature sleeps in a giant egg at the top of Mount Tamaranch and can only be awakened by the eight Siren musical instruments hidden in eight dungeons.
Link begins exploring dungeons and gathering tools. During the search for the sixth tool, he goes to the Ancient Ruins location. There he finds a mural that tells about the reality of the island: it is an illusion that is part of the dream of the Fish of the Wind. After that, the owl tells Link that this is only a rumor and only the Wind Fish knows for sure, true or that. The island-dwelling monsters who want to rule the Wind Fish dream world hinder Link in his quest for tools.
After collecting all eight instruments from Koholint's eight dungeons, Link climbs to the top of Mount Tamaranch and plays the Ballad of the Wind Fish. The egg, where the Wind Fish sleeps, shatters, Link enters, and then engages in battle with the last boss, who takes the form of Ganon and other past opponents of Link. His last transformation is the Cyclops Detail. After defeating the boss, Wind Fish explains to Link that the entire island of Koholint is the protagonist's dream. When Link starts playing the Ballad of the Wind Fish again, he wakes up with the Wind Fish, and the island and its inhabitants slowly disappear. Link finds himself lying on a piece of wood in the center of the ocean, with the Wind Fish flying overhead. If the player has not lost a single life during the passage, then after the final credits the flying Marin will be shown in the original version of the game she is shown as a girl with wings, while in the DX version she takes the form of a seagull.

Like most of The Legend of Zelda games, Link's Awakening is an adventure game focused on exploring the world and fighting. Most of the game is shown at the top. The player travels through the territory of Koholint Island, fights monsters and explores underground dungeons. Dungeons are gradually becoming more and more difficult, each of them contains a boss that the player needs to defeat. As a reward for the victory, the hero receives additional containers of hearts, which increase his health. If all heart containers are empty, the game will restart from the moment you enter the last door you visited. Destroying the boss also grants the player one of eight musical instruments needed to complete the game.
Link's Awakening was the first Zelda game to feature Link's top-down jumps; Previously, he could only jump in Zelda II: The Adventure of Link in side-scrolling stages. The player can expand the abilities of the protagonist with the help of in-game items that are in the dungeons or get to Link after interacting with other characters. Some items open the way to previously inaccessible locations and are necessary to enter the dungeon. The player can steal items from the store, but doing so will cause the character's name to change to "THIEF" until the end of the game, and the store owner will kill Link when he enters the store again.
In addition to the main quest, Link's Awakening contains side quests and mini-games. As the game progresses, you can collect shells; by collecting 20 shells, the player can get a powerful sword capable of emitting energy discharges when Link's health bar is full. In Link's Awakening, a trade quest is available for the first time - a player can give a character a certain item, and in return receive another, which, in turn, must be transferred to some other character. It is also the first game in the series to allow you to define functions for your game controller buttons yourself, allowing you to create different combinations of items to use. Other mini-games include fishing and playing the ocarina (this mechanic became one of the main mechanics in the next game Ocarina of Time).
‹
›
Home
View web version