The Adventures of Bayou Billy (NES) 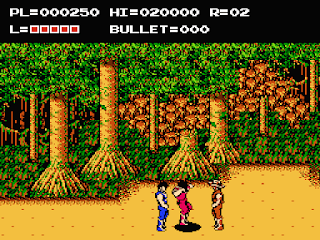 Genre: Action, Racing / driving
Perspective: Behind view, Side view
Visual: 2D scrolling
Gameplay: Beat 'em up / brawler
Published by: Konami
Developed by: Konami Industry Co.
Released: 1989
Platform: Nintendo (NES)
Konami again brought us an interesting game. This time the hero will be a simple guy Billy West, a bit like the famous Crocodile Dundee. His beloved was kidnapped by the head of the mafia, and Billy rushed to save her. IA combines as many as three genres. Beat'em up, where Billy deals with the enemy with his fists and selected weapons. Race on the roads where, driving a jeep, you need to chase the cars of villains. Finally, shoot'em up with a view from the eyes, where you can use a light gun if you want. Excellent graphics, soundtrack is also on top.
‹
›
Home
View web version