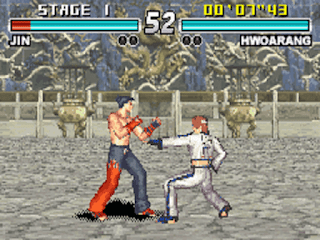 Genre: Action
Perspective: Side view
Visual: 2D scrolling
Art: Anime / manga
Gameplay: Fighting
Interface: Direct control
Setting: Fantasy
Published by: Namco Hometek Inc.
Developed by: Eighting Co.
Released: 2002
Platforms: Game Boy Advance (GBA), PlayStation (PSX, PS1)
This project will be the first 2D game in the Tekken series. However, although the GBA does not have a 3D processor, nevertheless, programmatically it is possible to create pseudo-three-dimensional objects, to which the arena will belong in the Tekken Advance. Nine Heroes: Jin Kazama, Paul Phoenix, Forest Law, Hwoarang, Gun Jack, King, Ling Xiaoyu, Nina Williams, and Yoshimitsu they look the same as in the original, and their sprite is of no fundamental importance - all the same, the battle went on an invisible line before. But the four-button control scheme will be replaced by a two-button, and Tag Battle will almost certainly be implemented and, at the same time, even better than on CD consoles.
‹
›
Home
View web version