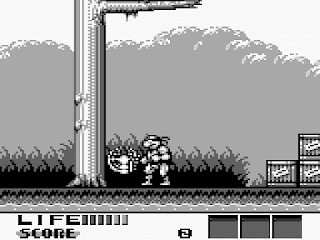 Genre: Action
Perspective: Side view
Visual: 2D scrolling
Gameplay: Metroidvania, Platform
Narrative: Martial arts
Published by: Konami (America)
Developed by: Konami Co.
Released: 1993
Platform: Game Boy
Unlike previous games in the series, this game is a so-called metroidvania. At the start of the game, the player controls Michelangelo who must rescue the rest of the turtles before the player can use them. Each turtle has unique abilities necessary to progress through the level and complete the game. The player has to defeat five bosses.
‹
›
Home
View web version