TMNT: Back from the Sewers (Game Boy) 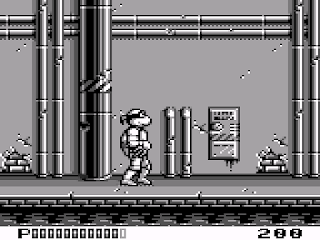 Genre: Action
Perspective: Side view
Visual: 2D scrolling
Gameplay: Platform
Narrative: Martial arts
Published by: Konami
Developed by: Konami Co.
Released: 1991
Platform: Game Boy
Just like the first TMNT game for NES, the player can choose turtle before each course. Each turtle has its strengths and weaknesses. Donatello makes powerful attacks with is slow, Raphael is fast but has short range, while Leonardo and Michelangelo are well balanced. When a turtle is defeated, it is captured by the enemy. The game is over as all four turtles are captured. After completing a course, the player is given the opportunity to rescue a captured turtle. If no turtle has been captured, you can instead play a bonus course, and get a refill on the energy meter.
The game contains several concepts from typical beat 'em up games, such as trying to avoid boulders on underground tracks, skateboarding and jumping, and the game usually changes from being typically 2D where you go left and right to a more open area where the turtles can go all over the screen. The bosses in the game are standard characters: Bebop, Rocksteady, Baxter Stockman, General Traag, Granitor, Krang, Shredder and Super Shredder, but just like in Fall of the Foot Clan, Krang is the final boss. The game has different levels of difficulty there, depending on the level, which affects the strength of the enemies and the attacks of the bosses in number.
‹
›
Home
View web version