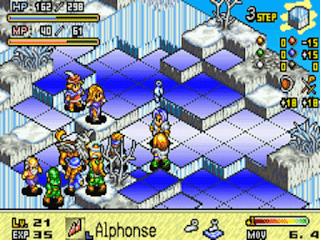 Genre: Role-Playing (RPG), Strategy / tactics
Visual: Isometric
Art: Anime / manga
Pacing: Turn-based
Setting: Fantasy
Published by: Atlus U.S.A.
Developed by: Quest Corporation
Released: 2002
Platform: Game Boy Advance (GBA)
Tactics Ogre for GBA is a worthy continuation of the Ogre Battle series for SNES, N64 and others. Only now the battles are being conducted in the style of a tactical turn-based duel. In the World Map mode, you can arrange training battles between groups of your fighters, buy things and hire new soldiers, change their class and special skills. Entering into battles, it is necessary to competently manage units, taking into account the combat properties of soldiers, the landscape of the battle site, and even climatic conditions. The pumpkin head acts as an assistant in the game - an unusual advisor, it should be noted. As for the graphics and sound, everything is pretty familiar here for games of this genre, that is, very cool. Recommended for everyone.
‹
›
Home
View web version