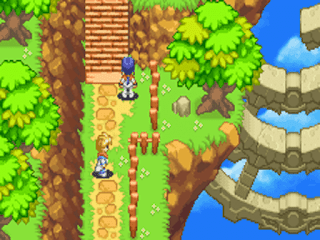 Genre: Action, Role-Playing (RPG), Strategy / tactics
Perspective: Side view, Top-down
Pacing: Real-time
Published by: Atlus U.S.A.
Developed by: Flight-Plan Inc.
Released: 2006
Platform: Game Boy Advance (GBA)
The world of Linbalm was once again threatened. The seal containing the powerful demon Goura has been damaged and an ancient evil has awakened! Only our hero is able to prevent the apocalypse. Summon Night - Swordcraft Story 2 improves on pretty much everything in the first game. The world of the game has expanded, exploring and finding secrets has become more fun. The crafting system has become much more sophisticated, limiting the creation of new weapons to the number of available "shapestones". Also, the balance of weapons has been slightly changed and its number has increased to two hundred! The graphics have become much more detailed and colorful. The music was made much better - the melodies fit perfectly into the general style of the game, creating a complete immersion in the world of a fantasy tale. Verdict is one of the best RPGs for the GBA, combining excellent design and sophisticated gameplay.
‹
›
Home
View web version