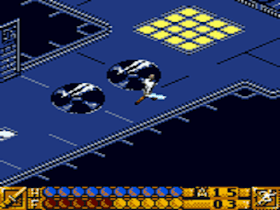 Genre: Action
Perspective: Bird's-eye view
Visual: Isometric
Setting: Sci-fi / futuristic
Published by: THQ Inc.
Developed by: HotGen Ltd.
Released: 2000
Platform: Game Boy Color (GBC)
The game's plot is similar to that of the original film, but does not include the events on Tatooine. Instead, there is a level detailing the approach to Teed through the catacomb system and Obi-Wan's adventures aboard a Trade Federation landing craft. It is also the only video game that allows the player to pilot a bongo.
The game begins with a Trade Federation ship and ends with a battle against Darth Maul on Naboo.