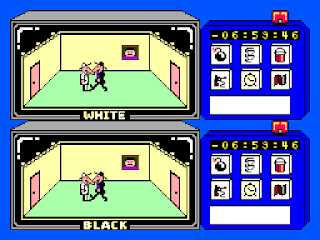 Genre: Action, Strategy / tactics
Perspective: Side view
Visual: Fixed / flip-screen
Gameplay: Puzzle elements
Narrative: Spy / espionage
Published by: SEGA of America
Developed by: First Star Software
Released: 1986
Platform: SEGA Master System
Two spies, White and Black (Heckel and Jackel), directly from the pages of MAD Magazine, get to the embassy, and they have to leave it with a case of secret documents in their hands. So everything is simple, you control one spy, and the computer another. You need to find a way out of the building, while taking something with you Passport, Money, Key and secret Documents. In general, do not get bored.
‹
›
Home
View web version