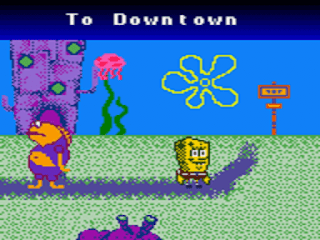 Genre: Adventure
Perspective: Side view
Published by: THQ Inc.
Developed by: Vicarious Visions
Released: 2001
Platform: Game Boy Color (GBC)
The player controls Sponge Bob, who must explore the entire Bikini Bottom, whose areas are city streets, an amusement park, a desert, a jungle and the Goo Lagoon to retrieve the Flying Dutchman's Golden Neptune Spatula. If SpongeBob is hit without the Class Prefect uniform (if the player got it from Ms. Puff or opening chests in certain parts of the game), he loses his pants, leaving only his underwear. If he also loses his underwear, he loses a life.
‹
›
Home
View web version