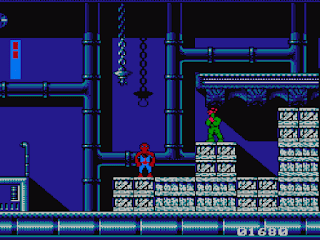 Genre: Action
Perspective: Side view
Visual: 2D scrolling
Published by: LJN
Developed by: B.I.T.S.
Released: 1992
Platform: Nintendo (NES)
A rather unsightly incarnation of Spider-Man on the NES. The superhero runs through the streets, basements and warehouses, fighting the famous Sinister Six under the leadership of Doctor Octopus. In battle, the Spider uses his fists and legs, only to hit the enemy with a blow, you still have to try. The hero can use the web as well, but it's hard to say where it is really useful. The character also climbs the walls, though not all of them. Very few lives are given, and it is not easy to avoid the "game over". In general, the game about the great fighter against evil came out not too serious.
‹
›
Home
View web version