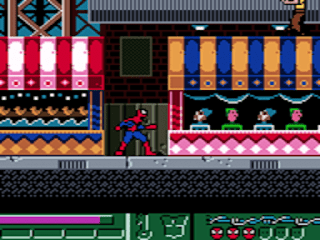 The player controls Spider-Man, guiding him through six levels, battling various junior thugs and minions until he defeats the villains at the end of each level.
Spiderman can jump, hit, kick, collect web for cartridges to shoot web projectiles, swing on cobwebs and climb certain walls.
The design of each level consists of two stages up to the third stage, which will involve a boss fight.
‹
›
Home
View web version