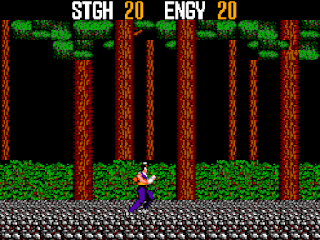 Genre: Action, Adventure
Perspective: 1st-person, Side view
Visual: 2D scrolling
Gameplay: Metroidvania
Setting: Fantasy
Published by: SEGA of America
Developed by: SEGA Enterprises Ltd.
Released: 1989
Platform: SEGA Master System (MS)
Your name is Kane Tensen, but your parents are simple farmers in feudal Japan. However, one cannot resist the dream of becoming a big and noble warrior. On your thirteenth birthday, your parents allow you to join the Temple of the Meeting, where ancient martial arts were taught. Years passed, you learned a lot and became a mystical warrior. But everything was peaceful and quiet until the attacks of nightmarish creatures on the villages began. Daikak, the sage of the Temple of the Meeting, sent out a cleanup team, but no one returned from the villages. Now they remembered about you and sent in search of the group. It's time to face your destiny! This is the plot, and the game is no worse.
‹
›
Home
View web version