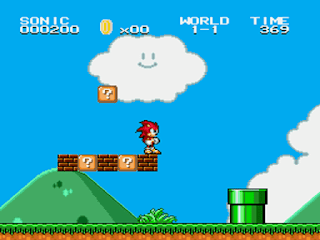 Genre: Action
Perspective: Side view
Visual: 2D scrolling
Art: Anime / manga
Gameplay: Platform
Platform: SEGA Genesis / Mega Drive
This game is a pirate hack (modification) of the pirated, that is, not licensed by Sega (Unlicensed) Super 1998 Mario 2. Pirate port (transfer) of Super Mario Bros. from the collection of Super Mario All Stars games for the Super Nintendo game console. There are not many special changes in the game, as usual for the pirates, the main character of the game Mario was replaced by Sonic the Blue Hedgehog. Or rather, at first, Sonic becomes red, a natural color when he picks up a mushroom. Some of the title screen were also redrawn, including one taken from the Sonic Jam game for the Sega Saturn. But here, of course, the number of colors is smaller. In the game engine of the game Mario, no special changes have been made. There are still significant bugs. This may be due to the inexperience of the Pirates who made this game, or to the greed of the customer. But to all those who have ever wanted the mascot of the SEGA Genesis / Mega Drive game console - Sonic, to enter the world of Mario. Now they can experience it in the shoes of Mario.
‹
›
Home
View web version