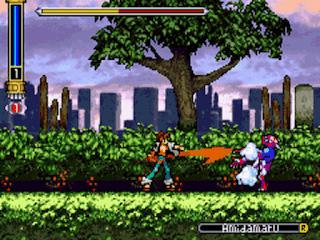 Genre: Action, Role-Playing (RPG)
Perspective: Side view
Visual: 2D scrolling
Art: Anime / manga
Gameplay: Metroidvania, Platform
Published by: Konami Digital Entertainment
Developed by: Konami Computer Entertainment Japan
Released: 2004
Platform: Game Boy Advance (GBA)
A metroidvania game based on famous anime and manga. The main character, Yoh Asakura, will have to challenge the mysterious Magister who plans to resurrect the demon king Mephias. Yo will be helped by his friends and guardian spirits. The hero moves around the locations selected on the map, fights against monsters, and after battles with bosses, he gets a certain skill. As the game progresses, Yo collects souls - various abilities, both passive (increasing protection or increasing speed), and activated by pressing a certain button. The graphics are good, the music is quite good. The game will appeal not only to fans of the original anime.
‹
›
Home
View web version