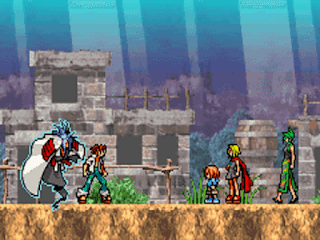 Genre: Action, Role-Playing (RPG)
Perspective: Side view
Visual: 2D scrolling
Art: Anime / manga
Gameplay: Metroidvania, Platform
Published by: Konami Digital Entertainment
Developed by: Konami Corporation
Released: 2005
Platform: Game Boy Advance (GBA)
Continuation of the adventures of the young shaman Yoh Asakura. This time it is necessary to stop your twin brother Zeke: to thwart plans to revive the sinister "Guardian of Demons" and free their friends from Zeke's control. The game hasn't changed much compared to the first part - it's all the same metroidvania, with a constant search for new spirits, battles with hordes of monsters and entertaining boss fights. Of the innovations, it is worth noting the ability to strengthen some spirits. Also, now you can learn new fighting techniques - for this you need to look for the corresponding scrolls at the levels. The main drawback is only a few battles copied from the first part. As for the rest, everything is up to par - the graphics are in place, the music also raises no objections.
‹
›
Home
View web version