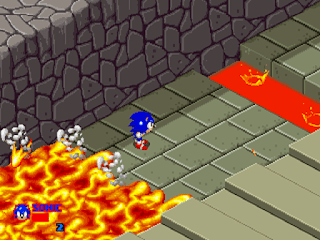 Genre: Action
Perspective: Bird's-eye view
Visual: 2D scrolling
Art: Anime / manga
Pacing: Real-time
Gameplay: Platform
Interface: Direct control
Setting: Fantasy
Published by: SEGA Enterprises Ltd.
Developed by: Sega AM3 R&D Division, Sonic Team
Released: 1993
Platform: Arcade Machine
According to the plot of the game, Sonic the hedgehog and his two friends - Mighty the Armadillo and the Ray the Flying Squirrel, were captured by Doctor Eggman and released on his island, which consists of hundreds of traps that the main characters must avoid.
The gameplay is similar to other games in the Sonic the Hedgehog series, but is completely focused on the player's responsiveness to the endless falling of stalactites, stones, lava and other dangerous traps. The game has the possibility of collective passage for three players, for which the arcade platform has three trackballs, each of which is responsible for controlling a particular character. It is possible to play simultaneously for three people. In total, you need to complete seven game levels ("Volcanic Vault", "Icy Isle", "Desert Dodge", "Trap Tower", "Landslide Limbo", "Wild Water Way" and "Eggman's Tower"), the names of which (except for the last one) are alliterative, that is, in them the words begin with the same letter. If the player's character stumbles upon a dangerous obstacle, he will lose health, which can be increased with the help of rings. At the end of each level, the points that the player can get by collecting rings in the levels are calculated. If the player has collected 50 or more rings, then he receives additional health and points.
At the last level of the game, which is the island's base, Dr. Eggman activates the self-destruction of the tower, and the player needs to get out of it in 20 seconds. After this is done, the player will see the credits and the ending, in which the heroes of the game got out of the island before the explosion, and the scientist flies away in his the Egg Mobile, but he runs out of fuel and falls into the sea. After that, the player will see a table with records.
‹
›
Home
View web version