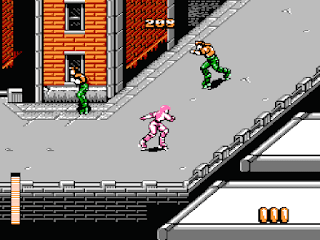 Genre: Action
Perspective: Side view
Setting: Sci-fi / futuristic
Published by: Ultra Software Corporation
Developed by: Konami Industry Co.
Released: 1990
Platform: Nintendo (NES)
Based on the old, now forgotten, "Rollergames" show, they managed to create a solid action game with beat'em up elements. Throughout the entire game, we control the roller-skater. He fights against the criminal group V.I.P.E.R., which has kidnapped the team's leading player. You have to overcome obstacles at high speed and fight enemies hand-to-hand. You need to choose one of three youth teams: T-Birds, Hot Flash and Rockers. The T-Birds player is strong but clumsy; Hot Flash character is fast but low-powered; the Rockers representative has a balanced attack and speed. For a long jump, you need a good acceleration. On narrow paths, you need to skillfully maneuver, since inertia has not been canceled.
‹
›
Home
View web version