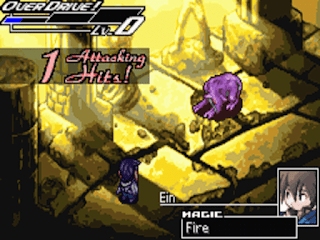 Genre: Role-Playing (RPG)
Perspective: Isometric
Art: Anime / manga
Pacing: Turn-based
Gameplay: Japanese-style RPG (JRPG), Quick Time Events (QTEs)
Setting: Fantasy
Published by: Atlus U.S.A.
Developed by: Sting
Released: 2005
Platform: Game Boy Advance (GBA)
A somewhat unusual RPG. Your hero is a wingless angel who was given a special mission by the gods. However, having reached the desired point, he and his partner stumbled upon a strange fairy, and everything went head over heels. The hero woke up in a forest village, where he has to meet new friends (for some reason, exclusively female) and learn a lot. Unlike conventional RPGs, where it is enough to fight enemies to gain levels, here the heroes gain their heroic experience using different types of weapons. The game is very beautiful and interesting.
‹
›
Home
View web version