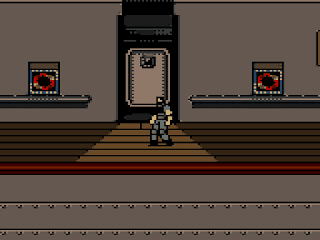 Genre: Action
Perspective: 1st-person, Top-down
Visual: Isometric
Gameplay: Puzzle elements, Shooter
Narrative: Horror
Published by: Capcom Entertainment
Developed by: M4 Ltd.
Released: 2001
Platform: Game Boy Color (GBC)
The action takes place in 2000 on a ship - a hidden laboratory of the corporation "Umbrella", which conducted research on the development of the T-virus - a biological weapon. An accident occurs, due to infection with a virus, the inhabitants of the ship become mutants.
Leon Kennedy, one of the protagonists of Resident Evil 2, is ordered to investigate an ocean liner, Starlight, on which Umbrella is rumored to be developing a new type of bio-organic weapon. Eventually, the headquarters loses contact with Leon and Barry Burton, a friend of the character from the original Resident Evil, sets out to find him.
Upon learning that the ship's crew and passengers have turned into zombies, Barry meets the only surviving girl named Lucia, who, for some unknown reason, can sense the presence of the new B.O.Ws, and also has other mysterious abilities. Lucia is kidnapped by a monster, and Barry goes to look for her, where he meets Leon, and together they go to save Lucy.