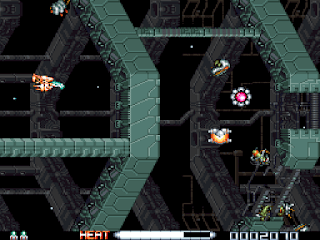 Genre: Action
Perspective: Side view
Visual: 2D scrolling
Gameplay: Arcade, Shooter
Vehicular: Space flight
Setting: Sci-fi / futuristic
Published by: Jaleco USA
Developed by: Irem Corp.
Released: 1994
Platform: Super Nintendo (SNES)
R-Type III: The Third Lightning is a sequel to the legendary R-Type series of flying shooters from Irem. The levels have become even crazier. That only it is worth maneuvering near an uncontrollable extraterrestrial station, at the appearance of which an enemy robot in the first level was fucked. The weapon has become more effective. As stated in the description for the first R-Type game on this console, the main feature of the series is the following satellite, which can be used as a shield and as a complementary device to the ship's firepower. This game features three types of satellite, of course, with different weapons. the game still has several shooting modes, you can throw out an energy charge in one fell swoop - the Beat mode, or you can save up energy and stretch it, pouring more powerful bursts on enemies or bosses - the Hyper mode. An excellent series that has many sequels on various systems.
‹
›
Home
View web version