Prince of Persia: The Sands of Time (GBA) 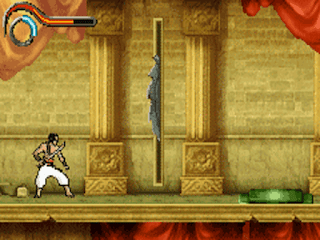 Genre: Action
Perspective: Side view
Visual: 2D scrolling
Gameplay: Platform
Setting: Middle East
Published by: Ubisoft Entertainment SA
Developed by: Ubisoft Divertissements Inc.
Released: 2003
Platform: Game Boy Advance (GBA)
The Prince's adventure on handheld consoles continues! In the GBA version of The Sands of Time, the dizzying somersaults of the greatest Persian acrobat of all time await us. But not only this worthy husband will be given under our leadership, equality - this is the new motto of modern developers, and therefore we can now manage a beautiful girl - a daughter Maharaja at your service! The presence of the second character in the game noticeably embellishes the gameplay - in the process of passing you will encounter many moments where it is necessary to use the skills of both heroes.
I am very pleased with the diligence with which the developers approached the creation of the Prince. All levels in the game are built in such a way that every now and then you have to use some acrobatic trick from your ward's arsenal. Here you have a double jump, a somersault, and a waving saber in the air ... The game is not without elements of mountaineering: to reach his goal, the Prince will have to climb curtains, climb slippery columns and cling to the edge of a deadly abyss.
Unfortunately, his combat comrade-in-arms contrasts too strongly against the background of our gallant boy. To add a female character to the game, the developers added, but for some reason they did not want to give him due attention. The girl plays, by and large, the role of ballast. Its main two tasks are: to shoot at the giant levers, which the Prince himself cannot hit, and prompts in what sequence to press the buttons.
From an overview of the individual qualities of the characters provided to us, let's move on to considering their interaction. Here everything is much more rosy and smiling! Already in the middle of the game, you will not find a place where you can get by with only the Prince.
So! Having impressed with decent gameplay, consider the graphics of the game. She is also very happy - the Prince's movements are plastic, the interiors are colorful in an oriental way.
Unfortunately, the sound is a little upsetting - there is no soundtrack in the game, but only the sounds of "blows" and sometimes the death moan of one of the characters.
What do you want to say in the end? Of course, the lack of a soundtrack is a little upsetting, but thanks to good graphics and addictive gameplay, the game deservedly earns its mark - "8"!
‹
›
Home
View web version