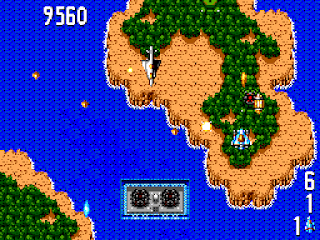 Genre: Action
Perspective: Top-down
Visual: 2D scrolling
Gameplay: Arcade, Shooter
Published by: SEGA Enterprises Ltd.
Developed by: Compile
Released: 1993
Platform: SEGA Master System (MS)
In 1930, after the Great Depression, many pilots became air pirates to survive and robbed everyone in the skies over Italy. But one dude on his super plane began to work as a hunter for these pirates. The plot is delusional, it does not fit into this game. It would be better to write "In 2030 ...". The game is a regular scroller, top view. There is nothing special about it: several types of weapons, the ability to collect upgrades to it, four speeds at the plane, heaps of different enemies from the simple to the most incredible, especially when you consider the history; bonuses. Plus to all this, good graphics and normal sound and you can spend half an hour, or even more.
‹
›
Home
View web version