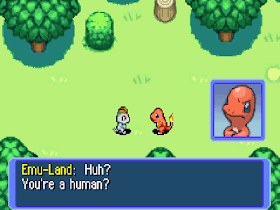 Genre: Role-Playing (RPG)
Perspective: Bird's-eye view
Art: Anime / manga
Pacing: Turn-based
Gameplay: Roguelike
Published by: Nintendo of America Inc.
Developed by: Chunsoft Co.
Released: 2006
Platform: Game Boy Advance (GBA)
The player controls a group of Pokemon traveling around the game world and performing various missions to further advance the story. You can only control the Pokemon-leader of the team, the rest are controlled by artificial intelligence, although at a certain stage the player will be able to change the leader at any time, you can also customize the behavior and tactics of partners in a special menu. Missions take place in various dungeons, to complete them you need to fulfill various conditions: for example, find a certain item, save a lost Pokemon, or just go through a dungeon. Dungeons are made up of randomly generated floors. If the player walks through the dungeon for too long, the Leader Pokemon may get hungry - if the Leader Pokemon is hungry, then he loses health points. To satisfy hunger, you need to eat - for this there are special items, food. Hostile Pokemon walk the floors. As soon as they see the player, they immediately attack him.
The battle takes place in turn-based mode. During the battle, the player can attack the enemy, use an ability, object in battle, or move around the battlefield. Each Pokemon has health points - if the leader Pokemon loses all health points, then the player loses the battle and his team disappears from the dungeon, having lost all the game currency and exactly half of the items. When the player wins, the player's Pokemon gain experience, when a certain amount of it is received, the Pokemon's level rises, and the characteristics of the Pokemon grow with the level. Also, with a new level, you can sometimes learn a new ability. When certain conditions are met and after entering a certain location, a Pokemon can evolve - turn into an evolved form.
In addition to the missions that must be completed, the player can optionally go through additional randomly generated missions for an appropriate reward in the form of game currency and / or items. The more difficult the mission, the more valuable the reward. Reputation points are also awarded for missions. You can recruit any hostile Pokemon from the dungeon into a team, but for this you need to fulfill two conditions: you need to defeat the hostile Pokemon and at the same time have a sufficient number of reputation points. The defeated Pokemon will offer the player to join the team.
In between missions in special locations, you can talk to NPCs, buy or sell items, evolve Pokemon, etc. There is also an opportunity to take additional missions from the team mailbox or from the bulletin board and customize the team composition for the next mission.

The game takes place in a fictional fairytale world where there are no people - only talking Pokemon live in this world. In this world, some Pokemon form rescue teams. Pokemon organized their own civilization, its center in these games is Pokemon Square. Pokemon gather in the Square to discuss the latest developments and bargain things. In addition, there is the Pellipers postal service, which handles the delivery of errands for the rescue teams. There are many other locations in this world called dungeons - forests, mountains, caves, ancient ruins, seas, etc.

Before starting the game, the player will need to go through a small psychological test, where you need to answer questions about how the player would act in a given situation. After the end of the test, the player is asked to choose the type of his first partner Pokemon and give him a name.
The main character wakes up in the forest and sees a partner Pokemon above him. At the same moment, the main character discovers that he has turned from a human into a Pokemon (the psychological test determines which Pokemon the main character turned into). He also discovers that he has completely lost his memory. Suddenly they see Butterfly, who has lost her child Caterpie. When the heroes save Caterpie, they decide to organize a rescue team together.
Natural disasters begin in a few days. The protagonist learns the legend of the Ninetales, who cursed a man who touched his tail. Ninetales predicted that as soon as a person turns into a Pokemon, cataclysms will begin. In search of the truth, the heroes go to the prophet Ksat, who tells them that the main character really was once a man. The head of the Team Meanies Gengar, learning about this and wanting to remove the competing team of the protagonist, substitutes him and announces that the cataclysms will end as soon as the protagonist is killed. The heroes plan to escape from the Pokemon Square, but they are met by Alakazam, Tyranitar and Charizard - Team ACT, one of the most respected teams in the gaming world. Alakazam tells the main character that he was ordered to kill him and everyone who will stand on him side, but since Alakazam is loyal to him, he gives him one night to escape from the city. Together with his first partner, the main character escapes, and the pursuit follows on his heels.
Escaping from the pursuit, the heroes go north. They pass Mt. Blaze, defeating Moltres, and Mt. Freeze, defeating Articuno there. Since Moltres and Articuno are both legendary Pokemon, they also sense an impending cataclysm. On Frozen Mountain, Absol joins the heroes, who wants to find out the cause of the cataclysms. In the same place, three heroes face the ABT Team, this time they are not going to spare them. The ABT team is suddenly stopped by the Ninetails, who tells them that the main character is not the same person from the legend and the real danger is Groudon. Alakazam orders the main character to go home, and he and his team goes to Groudon. Other Pokemon accuse Gengar of lying. Several days have passed, the ABT Team has not returned, the heroes are beginning to worry. In the Plaza, they decide to send another team consisting of Blastoise, Octillery and Golem, but they return defeated.
The main character decides to go to Groudon himself and defeat him. As soon as he reaches him, he sees that Charizard and Tyranitar are defeated, and the wounded Alakazam is still fighting. When Alakazam falls, a team of heroes fight Groudon and defeat him. In Pokemon Square, they were greeted as heroes, but Xatu says that the falling meteorite is the true cause of the cataclysms. The only way to destroy the meteorite is to ask Rayquaza, a dragon Pokemon that lives high in the clouds. Rayquaza uses the "Hyper Beam" attack on the meteor and thereby saves the world. The team wakes up on the ground, surrounded by other Pokemon. The protagonist realizes that, having fulfilled his destiny, he must leave the Pokemon world and become human again, and disappears. After the closing credits, the main character decides to return to this world, when he returns, he greatly surprises the Pokemon. After completing the main plot, the game does not end - the player is given the opportunity to go through many side quests. As it turns out, the meteorite fragment nevertheless fell to the ground, and the Pokemon next to it began to evolve.
‹
›
Home
View web version