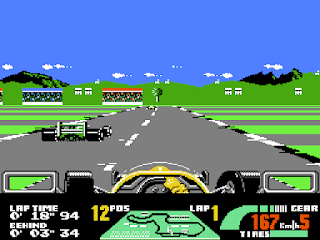 Genre: Racing / driving, Simulation
Perspective: 1st-person
Vehicular: Automobile, Track racing, Vehicle simulator
Setting: Oceania
Published by: GameTek
Developed by: Gremlin Graphics Software Limited
Released: 1993
Platform: Nintendo (NES)
It is one of the most popular and high quality Formula 1 simulators on the NES. The gameplay is not bad: it is not boring to play, but also not very difficult in general. The game contains the real names of the riders and the names of the teams of that time. From the settings of the car, you can set the box, the type of tires and the inclination of the wing. The gameplay itself will not make you bored, because the car noticeably skids around corners, and the rivals simply do not allow to overtake. Plus, the game also has weather conditions, which means that the race can take place in the rain.
‹
›
Home
View web version