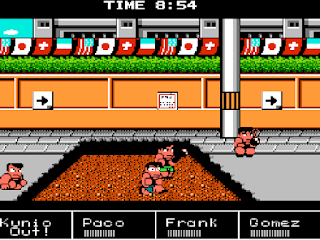 Genre: Action
Perspective: Side view
Art: Anime / manga
Gameplay: Arcade, Beat 'em up / brawler, Fighting
Published by: Technos Japan Corp.
Developed by: Technos Japan Corp.
Released: 1990
Platform: Nintendo (NES)
A very unusual and exciting sport. In the common people, the game is called the first Olympiad from Technos, since the competition consists of four different stages. Or simply called racing. The game is full of colors and creates a wonderful friendly and, at the same time, rivalry atmosphere. Surely, among other sports games, it breaks all records for a variety of locations. The music is amazing! In addition, before the start, it can be changed for each of the four stages - to choose 4 default tracks and two additional ones. But the most mesmerizing music is in the ending, where a girl sits on a ledge in the arms of the night.
Four teams from four different Japanese schools compete: Nekketsu, Hanzono, Reihou, Rengou. Each team has 6 athletes, differing in health, strength, endurance, speed on land and on water, and even a supply of air under water (yes, you will be thrown there too at the first stage). In general, the Persians have 15 parameters! At each race, one representative of the team takes part, i.e. in the game four are running at once. Each school has its own dedicated cheerleader - the captain's girlfriend.
So what is this marvelous sport? For the first two stages, you are competing on the run. At the first stage, you run around the outskirts of the city, at the second you compete in some special building with an abundance of all kinds of obstacles. The goal is one - to collect more points. You acquire them if you pound others, raise your weapon. Your run takes place on different screens, and the first you run the rest of the screen, the more points you get. More points are awarded when crossing the finish line - depending on your finishing position. You can lose points if you get hit by others, if you lag behind the one in front and disappear off the screen. Thus, in the first two stages, by default, you need to run to the finish line first, but you can do it easier by killing all rivals along the way. It should be borne in mind that three false starts will disqualify you.
In the third phase, the four schools are divided into two groups to act two by two. In front of you are two sleepers going up, over which a large red ball hangs. The side that breaks the ball wins. And it doesn't matter how many times you hit him. Whoever hit the ball last is the winner. So here one will have to break through to the top, and the second will have to defend him from rivals. It is worth noting that the Persian strength parameter greatly affects the number of blows required to hit the ball in order for it to fly apart.
The fourth stage is fights. Here the strongest is to be revealed by force. In each team, the Persians are endowed with specific capabilities and techniques that make the battle diverse and spectacular. Not knowing the capabilities of your Persian, you lose a lot in battle. So it takes a lot of practice to learn and master the techniques of all players. The disadvantage of this stage is that you can squeeze the victim from the edge and throw it endlessly against the wall. And you can even easier - throw it into the abyss, which bends around the battlefield from below and along the edges. A strange decision on the part of the developers, allowing the black method to win in a couple of seconds.
It should be noted that after four stages, points will still be handed out in five nominations. They will affect the balance of power only if the teams were on a level playing field throughout the game. The game itself can be made short, or extended for an hour. The possibilities of setting before each stage allow this: you can set the number of laps and the maximum allotted time. At the first stage, you can include the wind, which brings its own factor into the course of events, and before the third stage, you can change the combinations of pairs of schools. When playing with two or more at the beginning of the game, you can change the order of the stages, remove unnecessary ones (although there are no unnecessary ones).
Well, now the most basic game is weapons. Everywhere you are accompanied by objects that you can hit and throw: sticks, magic sticks, dumbbells, weights, grenades, pebbles, brass knuckles, wheels. Some have different trajectory and range. But the damage is almost the same, which I consider a serious drawback. Why dumbbells and kettlebells take away almost nothing is not clear to me. And the barely noticeable damage from the explosion of grenades is completely amazing. There are special brass knuckles that inflict serious damage. Pebbles are useful in the fourth stage - they allow you to fly on the floor, rotating around you. There are bottles with an elixir that restores and increases health, or adds power to throws. And swinging the baton increases your speed or the power of your blows.
Summing up, I would like to say that the game was great! Fortunately, physics did not disappoint either. When running without a weapon, you even have the ability to hit with your hand above and below you in the horizontal plane. Walking, running, jumping, hitting, swimming on water and under water, climbing, braking when slowing down, special moves - everything was done perfectly! Add to this a variety of levels, weapons, players, originality of competitions for four people, colorful graphics, worthy music. Awesome game! Who has not met, be sure to try it!
‹
›
Home
View web version