Need for Speed: Most Wanted (GBA) 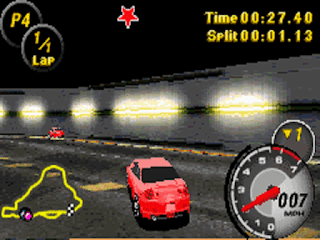 Genre: Racing / driving
Perspective: Behind view
Gameplay: Arcade
Interface: Direct control
Vehicular: Automobile, Street racing, Vehicle simulator
Published by: Electronic Arts
Developed by: EA Canada
Released: 2005
Platform: Game Boy Advance (GBA)
Compared to NFS Underground on GBA, this version did not make a brilliant leap forward. Nevertheless, the game is decent. As usual, a large number of cars, upgrades for them, as well as types of races are available. Among them there are races where you have to overcome the police cordons (you had to somehow justify the name Most Wanted). As for graphics and sound, there is nothing super-original.
‹
›
Home
View web version