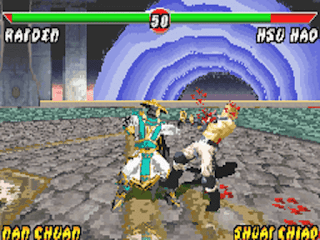 Genre: Action
Gameplay: Arcade, Fighting
Narrative: Martial arts
Published by: Midway Home Entertainment
Developed by: Midway Games
Released: 2003
Platform: Game Boy Advance (GBA)
MKTE is the second port for the Game Boy Advance handheld console. Due to the technical limitations of the console and the small volume of the cartridge, the game was released for this console as two separate "parts". The first part of the MKDA port for this system was released along with the rest of the MKDA versions in mid-November in the US and on February 14 in Europe. It was called Mortal Kombat: Deadly Alliance as well as the "big" versions. The second part of the port was released a year after the first and was called Mortal Kombat: Tournament Edition. It was the first Mortal Kombat game to use the 3D style of play on a handheld console.

Mortal Kombat: Tournament Edition slightly expanded the MKDA storyline by adding three new fighters to the game - Sektor, Noob Saibot and Sareena from Mortal Kombat Mythologies: Sub-Zero. Sektor and Noob Saibot are "repainted" by Cyrax and Scorpion, respectively. Also, MKTE is the first game in the series in which Sub-Zero does not appear. In addition, the Tournament Edition differs from the first port in the presence of new game modes. Tag Team mode allows you to arrange battles 2v2, and the Survival mode pits the player against a number of opponents in a battle for survival with one streak of life. Unlike the previous port, which had only one type of coin, gold, there are two types of coins in MKTE: gold and red. As in the previous version, the player can earn gold coins by going through the game. Red coins can only be earned by playing online. In addition to the usual Fatalities, the "weapon" Fatalities were included in the game.
‹
›
Home
View web version