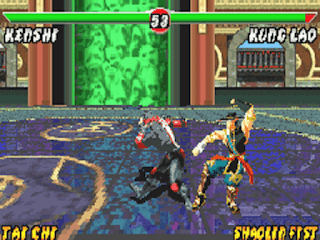 Genre: Action
Perspective: 3rd-person
Gameplay: Fighting
Published by: Midway Home Entertainment
Developed by: Midway Games
Released: 2002
Platform: Game Boy Advance (GBA)
At one time, the Mortal Kombat Deadly Alliance, for 64 bit consoles, brought the series out of its daze. Mortal Kombat fully transformed into three dimensions without losing that unique atmosphere. A harsh fighting game, harsh realities. Yes, Mortal was no longer the same as before, he changed, but who can say that the game was bad and non-canonical? All of the above can be attributed to the adaptation of the fifth part, on the GBA. It would seem to make a good port almost impossible, given the weak iron stuffing of the handheld. However, a miracle happened. You will not believe, but after a couple of minutes of playing, you begin to believe that the game is really three-dimensional. Here you can also deftly dodge a traumatic combo, simultaneously switch the fighting style, or parry a powerful super-blow, as in the original game. And here you really feel freedom of movement, not at all like in Tekken Advance, which in fact has become purely two-dimensional. The quality of graphics, sound and music is at a high level. Nicely modeled arenas and a lot of all sorts of goodies migrated from the older version. Even freshly knocked out blood does not dry out, and remains baked in the arena!
A wonderful port, an example of how you can adapt technically powerful games to weak consoles. And also - a good and very nice appendage to the main, fifth part of Mortal Kombat.
‹
›
Home
View web version