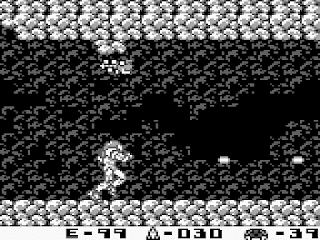 Genre: Action
Perspective: Side view
Visual: 2D scrolling
Gameplay: Metroidvania, Platform, Shooter
Setting: Sci-fi / futuristic
Published by: Nintendo of America Inc.
Developed by: Nintendo R&D1
Released: 1991
Platform: Game Boy (GB)
An indeterminate amount of time has passed since Metroid and Metroid Zero Mission. Bounty hunter Samus Aran has already beaten the Space Pirates numerous times up to this point. His first victory against the pirates was on the planet Zebes, where he destroyed his base and ensured that the recently discovered Metroid organisms were not used as biological weapons. To make sure this doesn't happen again, the Galactic Federation dispatched a squad of armed Marines to the Metroids' home planet, SR388. After no marine returned alive from the planet, they decided to send Samus Aran, since she had experience facing these creatures. She was assigned the mission of destroying, once and for all, the Metroid species on the planet. Once she reaches the planet, Samus lands her ship on the side of an active volcano, as it was the only entrance to the Metroids' nest; she enters the volcano and explores the labyrinthine caverns beneath the planet's surface. One by one, Samus destroys all the Metroid organisms that she stands in her way. As she does so, she notices the evolution that these creatures undergo, starting as jelly-like, jellyfish-like creatures and ending as large reptilian monsters. Upon reaching further down, she finds ruins of what was once a great city that belonged to the Chozo. Upon reaching the center of the planet, she meets Omega Metroids, who defend Metroid eggs and their respective larvae. With the destruction of all the Metroids on the planet, Samus meets the Metroid Queen. After a difficult battle, she manages to destroy it. On her way back to her ship, she encounters a Metroid egg, which hatches in front of her eyes. Metroid's baby, named by Samus as BABY, follows her to her ship and she finally decides to take her to the Ceres Space Colony for studies.

The layout of the game is similar to other Metroid installments. However, Metroid II is more straightforward in the sense that progress through the levels is not strictly controlled by acquiring the items as in the other games, but by killing a fixed number of Metroids in the area. Once they are destroyed, an earthquake occurs and SR-388's lava levels drop, allowing Samus to travel deeper and deeper into the caverns of the planet. As the precursor to the game, Metroid II does not contain any game maps. A unique aspect to the game is the Metroids detector, which displays the number of Metroids in the lower right corner of the screen. It is also the first game in the series to use save stations, located at various points around the planet. Before Metroid II, saving the game was accomplished by dying: in the Japanese version of the Famicom disk system, the player is given the option to continue or save, and in the international version of the NES, they give the player a password. This is the only Metroid game, so far, to not have an escape sequence. After the credits roll across the screen, the total time the player took to finish the game will be displayed. During the credits, Samus also shows the percentage of the items obtained. Depending on the final time that the player took to complete the game, after the credits end Samus will jump to the screen, and can be in a bikini or with the whole suit.
‹
›
Home
View web version