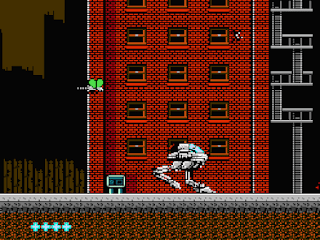 Genre: Action
Perspective: Side view
Gameplay: Platform, Shooter
Setting: Sci-fi / futuristic
Published by: Jaleco USA
Developed by: Sculptured Software
Released: 1991
Platform: Nintendo (NES)
An atmospheric action game where we start the level as a heavy robot. The game is similar to the famous Blaster Master. Here we can also leave the car and walk. A robot can destroy enemy equipment with its weight by jumping on it, and a human can penetrate narrow passages and take prizes. You can also improve your car and take more advanced guns (change to Select), but be careful: when firing one of them, the life energy of the robot is spent. By pressing fire and Select, you can throw the bomb. And to get out of the Mech, you need to press Select and jump. The key in the form of the letter K must be found without fail, without it they will not be released from the level. The difficulty is very decent, since enemies are constantly attacking you.
‹
›
Home
View web version