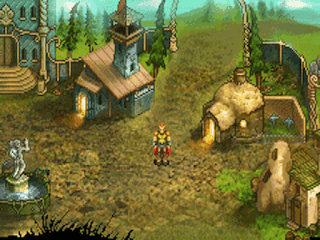 Genre: Role-Playing (RPG)
Perspective: 1st-person, Top-down
Pacing: Real-time
Setting: Fantasy
Published by: Graffiti Entertainment
Developed by: Sabarasa Inc
Released: 2006
Platform: Game Boy Advance (GBA)
RPG with quest elements. There are three classes of heroes to choose from - a warrior, a magician, a thief, with four types of stats (downright Diablo of some kind), as well as a set of combat and other useful talents. The game starts in a tavern, where the hero is given the first simple task. The combat process itself takes place in a variety of catacombs and caves in a mode similar to 3D action. Bandits, monsters roam there, there are chests, traps are waiting in the wings. Your hero can have 2 assistants, their skills are improved in the same way as the main character. The graphics are not bad, the music is nice, the plot is not very original, but moderately interesting.
‹
›
Home
View web version