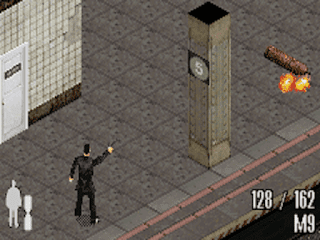 Genre: Action
Perspective: Isometric
Gameplay: Shooter
Setting: Contemporary, North America
Published by: Rockstar Games
Developed by: Mobius Entertainment Ltd.
Released: 2003
Platform: Game Boy Advance (GBA)
I don’t know many, emulators just don’t like games with GBA, but of course the disadvantages are visible and the graphics are not very good, and the games are not expressive enough. But this is not the point, there are many excellent games on GBA, but the hardware of the console, of course, leaves much to be desired, But here it is not in the graphics that matters, but in many respects in the sense and gameplay, how simple and uncomplicated it is. But I'll still try, compare the original PC and the GBA version, we'll see, we'll see!
In this game you will see:
You will not see:

Max is always Max even on GBA

The game takes us to New York, we play as a gallant police officer (Max Payne), who loves his wife and had a daughter not long ago. And here it is not such happiness, he comes home and sees that in his house, someone is, oh God, his wife and daughter are killed, and the V sign flaunts on his wall. Such is the background! And you yourself know, he decided to figure out why and for what, while he now has to go all this difficult path in order to figure out what is actually the matter! The rest of the events will unfold directly in the course of the game.
You have to figure it out. To go through the game, you are given the opportunity for chapters, each chapter is titled, and divided into several parts, that is, you can say you will not be bored.

Of course, you can talk for a long time and in a dreary way that this is what can be called graphics? On a PC, wow! But you have to think about what to compare with, so for the GBA the schedule is done quite well. Many have probably already noticed that if, on any other console, the game is in 3D, then on GBA it takes on an isometric view, this is just the case here. But at the same time, the developers are trying as much as possible to transfer the game with its atmosphere and features. Here, too, the developers worked out and very well.

And what do you think? Of course, it does not shine, but 5 seconds and you have already mastered, 5 more and your enemies are already lying! So it's not that complicated.

These include the fact that after you complete the game, you will be able to view all the comics without leftovers. Such a Max in the comics. This is that Neo is not just Max, a distinctive feature from shooters, was the ability to slow down time, it is preserved here. Max slows down time, and at this moment you know he is almost not vulnerable, but this opportunity ends quickly enough and then a stray bullet can set you on fire!

Not to be confused with the game, this is just a pain reliever that helps revive and improve Max's health during the game, he will swallow it in handfuls. And for the whole game he will eat a good hundred.

That, one might say, I recommend to play, of course, to everyone, those who played on the PC will remember how it was, and those who did not play will get acquainted with the brave police officer Max Payne!
‹
›
Home
View web version