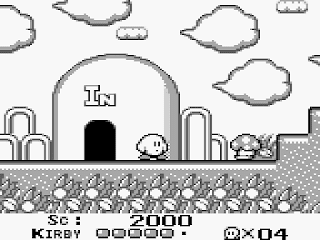 Genre: Action
Perspective: Side view
Visual: 2D scrolling
Gameplay: Platform
Setting: Fantasy
Published by: Nintendo of America Inc.
Developed by: HAL Laboratory
Released: 1992
Platform: Game Boy
The gluttonous King DedeDe stole all the food from the inhabitants of the Dream Land, as well as the Sparkling Stars needed to get more food. Kirby, a resident of the Dream Land, decides to return the food with the stars and stop DeDeDe.

Kirby's Dream Land is a platformer. Like many platformers in the 8-bit and 16-bit era of video games, there is a level scrolling system, and the game itself takes place in a 2D plane in which Kirby can move left and right, as well as jump. The main character's main attack method is to inhale enemies, as a result of which Kirby can either swallow them or spit them out, using them as a projectile. In addition to running and jumping, Kirby can also fly, filling himself with a stream of air and helping himself with his arms in flight. You can fly endlessly; however, during flight, Kirby's only way to attack is to release the air lock held in his mouth, which cancels his flight.
The game consists of five levels. The levels are made up of a series of large "rooms" rather than the single continuous corridors typical of platformers at the time, connected by doors that lead Kirby to various locations. Some of these doors lead to hidden areas or are alternative paths through the level. The doors act as save points, returning the player to the beginning of the "room", to which Kirby returns in the event of a loss of life.
As with many platformers from the 1980s, the player can accumulate points by defeating enemies and collecting items, after collecting enough points, the player gains an extra life. However, since there is no save function in the game, the scores are not recorded. In addition, there are no save files in the game, so the player needs to start over if the Game Boy disconnects, if he decides to return to the game or reset it. After completing the game, you are invited to try your hand at Extra Mode, in which the difficulty increases. At the end of the additional mode, the player is given a second code that allows the player to adjust the life and health settings, the difficulty of the game and freely listen to music and sound effects.
‹
›
Home
View web version